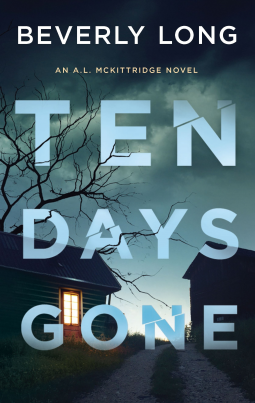 They know exactly when he’ll strike… They just have to find him first.

In all their years working for the Baywood police department, detectives A.L. McKittridge and Rena Morgan have never seen anything like it. Four women dead in forty days, each killed ten days apart. With nothing connecting the victims and very little evidence, the clock is already counting down to when the next body drops. A.L. and Rena will have to act fast if they’re going to find the killer’s next victim before he does.

But identifying the killer’s next likely target is only half the battle. With pressure pushing in from all sides, a promising breakthrough leads the detectives to Tess Lyons, a woman whose past trauma has left her too damaged to appreciate the danger she’s in. Unwilling to let another woman die, A.L. and Rena will put everything on the line to keep Tess safe and end the killer’s deadly spree once and for all–before time runs out again.

Thank you to Beverly Long, MIRA Books & NetGalley for a copy of this novel in exchange for an honest review.

This is the first installment of the A.L. McKittridge series by Beverly Long. The beginning of this story introduces the fact that there is a serial killer that has murdered four women in the last thirty days. They were all killed ten days apart. The premise is pretty interesting as someone who enjoys thrillers.

The characters were good enough. I liked A.L. and Rena, but the background characters in addition to the two main were a little confusing. There wasn’t much development and the romances were too much going on in my opinion. When starting this book, I did feel like I should’ve known them already which I was kind of confused about since this is the first in the series.

The story was just alright. I didn’t find it THAT boring, but I didn’t find it to be that intriguing either. The story did grab my attention, anything about murder and what happened is interesting, especially in the eyes of the police/detectives who are trying to figure out the case. The first half did drag a little, but it did pick up around halfway through.

I really wish the ending was a little more detailed and drug out. I feel like the ending was thrown in very quickly and it ended so abruptly. I understand that this is going to be a continuous series, but this story should’ve been a little bit longer in order to really wrap up this installment.

Overall, it wasn’t phenomenal, but it wasn’t bad either. I appreciate the A.L. McKittridge series so far, and I will definitely read the next installment. I do like the way that Beverly Long writes, and it makes me want to read her other books!

Nobody saw a thing. Or so they say…

Baywood police department detective A.L. McKittridge is no stranger to tough cases, but when five-year-old Emma Whitman disappears from her day care, there isn’t a single shred of evidence to go on. Neither the grandmother who dropped her off, nor the teacher whose care she was supposed to be in, can account for the missing child. There are no witnesses. No trace of where she might have gone. There’s only one thing A.L. and his partner, Rena Morgan, are sure of—somebody is lying.

With the clock ticking, A.L. and Rena are under extreme pressure as they discover their instincts are correct: all is not as it seems. The Whitmans are a family with many secrets, and A.L. and Rena will have to race to untangle a growing web of lies if they’re going to find the thread that leads them to Emma…before it’s too late.

Thank you to Beverly Long, MIRA Books & NetGalley for a copy of this novel in exchange for an honest review. I read this as a participant of the Harlequin Blog Tour.

This is the second installment of the A.L. McKittridge series. A.L. is a detective with the Baywood Police Department. In the first of this series, Ten Days Gone, there was a serial killer killing women ten days apart from each other. As the story started, I was super interested. In No One Saw, there’s a little girl, Emma, missing and again, I was super interested. However, in both books, even though they started off super strong for me, I found myself never getting as interested again throughout the novel. Things of course pick up, but never as strong as the start of the novel.

I noticed in the first novel that there were a lot of characters that I was introduced to that I felt like I should’ve known already. Again, in No One Saw, there were so many characters introduced in the interviews. I felt as though I was getting confused on keeping track with who was who. I also felt as though I should’ve known them again, and I still had no idea who they were. On the other hand, I did enjoy A.L. and Rena again. There were some development in characters which I appreciated.

Overall, I would keep reading this series. The second book in this series was definitely stronger than the first. If you’re interested in a detective mystery with strong main characters, this is definitely for you!

One thought on “The A.L. McKittridge Series by Beverly Long”